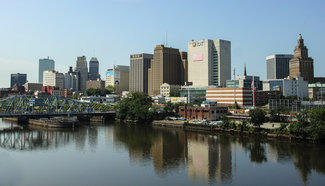 A joint venture between Prudential Financial, Garrison Investment Group, Onyx Equities LLC, Taconic Capital Advisors, and Axonic Capital LLC has purchased three of the four Gateway Center buildings in Newark for $300 million. They hope to invest as much as $50 million into renovating the 1.8 million-square-foot brutalist complex, which was constructed in the 1970s and 1980s. On top of the three buildings, the acquisition includes the Gateway’s concourse, as well as two sites that offer 500,000 and 800,000 square feet of development.

The complex is an iconic part of Newark’s downtown area, which is currently undergoing $4.5 billion worth of development. If the revitalization is successful, it could spread to other parts of Newark and give the city a much-needed shot in the arm.

The Wall Street Journal has more.

The de Blasio administration signed a letter of intent on Thursday to form a joint venture with the Related Cos. and Sterling Equities to develop Willets Point. The agreement gives the developers a timeline to produce an analysis of two distinct plans for the 17-acre stretch of land to the east of Citi Field. The first of these plans includes a hotel and a soccer stadium on top of retail and residential space. The other plan is a more traditional development model.

Pope Francis became the first pontiff on record to visit the Arabian Peninsula upon his arrival in the United Arab Emirates yesterday, the Islamic State is expanding into West Africa, global trade is retreating, El Salvador elected third-party candidate Nayib Bukele to be their next president, and European countries have joined the United States and numerous Latin American countries in pressuring Venezuelan President Nicolás Maduro to step down. Many Virginians are demanding Governor Ralph Northam (D.) leave office after a 1984 photograph surfaced that shows him dressed in extremely racist attire, the Senate is growing concerned about the number of top positions in the Trump administration that are still vacant, polling suggests that a majority of Americans support policies that force the wealthy to pay more in taxes, City Councilmember Rafael Espinal (D. – Dist. 37)wrote an op-ed in support of ending the rebate Wall Street traders receive each year (worth approximately $11 billion) and using that revenue to fund major infrastructure projects in the city, the 115-year-old Grand Street Bridge in Maspeth may finally get replaced, Waze GPS sensors have been installed in the city’s tunnels, Housing Preservation and Development Commissioner Maria Torres-Springer will be leaving her post in March, and the heat and electricity are back on in parts of the Metropolitan Detention Center in Brooklyn. Finally, the New York Times asked if subway crime is coming back. It then provided anecdotal evidence about crime before examining actual crime data that definitively shows that, no, subway crime is not coming back.

A retired actor has lived in a rent-controlled apartment in Greenwich Village for 63 years and pays $90 per month in rent, a little mold will not kill you, Americans eat more meat per capita than any other nation, crocodiles are swarming the streets of Australia after the country experienced record rainfall, a German town has voted against naming its streets, French farmers sent a grenade to a potato chip factory in Hong Kong because they thought it was a potato, it’s best to give someone an onion, the Patriots won the Super Bowl again, and being constantly irritable or angry may be a symptom of depression.