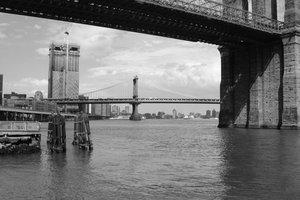 The City Planning Commission has approved the construction of three massive residential towers in the Two Bridges section of Manhattan. While the three projects will bring 3,000 apartments to the city—700 of which will be affordable—numerous local politicians and community members are irate, as the developments will drastically alter the character of the low-rise neighborhood.

Leading the charge against the CPC’s decision to greenlight the projects are Manhattan Borough President Gale Brewer, City Council Speaker Corey Johnson, and City Councilmember Margaret Chin, whose constituents in District 1 will be primarily affected by the developments. As the three buildings (which will be erected by JDS Development Group (260 South Street), Starrett Development (259 Clinton Street), and a joint venture between L+M Development Partners and CIM Group (247 Cherry Street)) will not have to go through the full public-review process due to some maneuvering by the CPC directly prior to the decision to approve the developers’ applications, this battle will likely take place in Supreme Court.

Mortgage rates were down once again, a new report issued by Freddie Mac has found. Since early 2017, the trend has been steadily upward.

Stocks fell sharply due to the news that Sabrina Meng Wanzhou, a top executive for and daughter of the founder of the Chinese technology firm Huawei, was arrested in Canada and may soon be extradited to the United States due to the company’s alleged business deals with Iran, which would be in violation of U.S. sanctions against Tehran; new surveillance images reveal that North Korea is expanding its missile program; and envoys from the United Nations are hoping to negotiate an end to the civil war that has plagued Yemen for the past four years. Drug companies who were given large tax breaks have used the public largesse to buy back shares instead of lowering the costs of existing medicine or creating new medicines, greenhouse gas emissions grew at an accelerated pace this year, modernizing the nation’s interstate highways is expected to cost as much as $50 billion per year for an unspecified number of years, murder rates for 2018 appear to be dropping precipitously across the U.S., the trade deficit was $55.5 billion October (its highest level in a decade), third quarter productivity was revised upward to 2.3 percent, and more people are using Airbnb to rent homes outside of big cities than in the past. The World Trade Center PATH terminal will be closed during most weekends over the next two years so that workers can make repairs to equipment and tunnels damaged during 2012's superstorm Sandy, a punctured can of bear repellent caused the evacuation of an Amazon fulfillment center in New Jersey, and a majority of Queens residents are in favor of becoming home to Amazon’s HQ2.

The XFL is back for some reason, there are Elvis-themed traffic lights in the German city of Friedberg, Luxembourg is making all public transportation free, living coral has been crowned the Color of the Year for 2019, and we’re all evidently being slowly poisoned by the herbicide glyphosate. Shark repellent is real and doesn't work, a donkey and an emu fell in love, fruit flies were first attracted to marula fruit, the fermented marula fruit may have also aided in the evolution of modern humans, ritual finger amputation may have been a common practice among early humans, and dark matter remains elusive. The film “Crazy Rich Asians” is bombing in China because filmgoers have little in common with the Asians in “Crazy Rich Asians,” as most are neither crazy nor rich nor crazy-rich. Finally, you can have a frog species named after you…for a price.