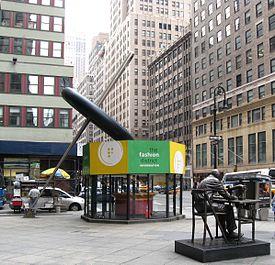 A new plan for the Garment District could preserve at least 300,000 square feet of manufacturing space for garment workers while allowing the rest of the area to be developed for other, primarily residential, purposes if approved. The plan would eliminate current zoning restrictions that have been in place since 1987, which have kept approximately 4 million square feet of space reserved for garment production. Those who are in favor of the plan say that it makes sense because, of that 4 million square feet of space, less than a quarter (700,000 square feet) is currently occupied by garment workshops, according to the city’s Economic Development Corp.

Most of the garment industry still operating within the city have left for greener pastures in the outer boroughs, particularly the Brooklyn Navy Yard and Sunset Park.

The current plan would give landlords within the Garment District a tax break for setting aside at least 25,000 square feet within their building for garment manufacturing, provided they give tenants the option to sign leases lasting at least fifteen years. Meanwhile, the city would dedicate $20 million to acquiring a building that it will convert into a hub solely devoted to garment manufacturing.

The City Planning Commission has voted in favor of a large and controversial development at 80 Flatbush on the border of Downtown Brooklyn and the more residential Boerum Hill. Though the vote was unanimous, many nearby residents maintain that the defining features of the development, a 74-story tower and a 38-story tower, will destroy the character of the neighborhood.

However, other residents believe that the development will bring much-needed housing and public schools to the area. The 1.3-million-square-foot complex being developed by Alloy Development, in conjunction with the New York City Educational Construction Fund, will include 5 buildings that house 922 apartment, two schools, and a cultural center. Of the 922 apartments, at least 25 percent will be affordable. The two schools, meanwhile, will each contain 350 seats. Additionally, the complex will be home to 245,000 square feet of retail space and 40,000 square feet of retail.

The City Council zoning subcommittee will vote on the project next week. This will be followed by the council’s land use committee. A vote before the full council is slated to happen before the end of September.

The Commercial Observer has more.

Venezuelan President Nicolás Maduro claims to have proof that former Colombian President Juan Manuel Santos was behind an attempt on the president's life this weekend, Chinese teenagers don’t know of Google or Twitter or Facebook because they have been brought up using Chinese-based sites that serve a similar function but are heavily censored, Belarus is cracking down on independent news agencies, and the United States will once again impose the sanctions on Iran that were lifted by the multilateral nuclear accord of 2015. In politics, five states are holding primaries today: Michigan, Ohio, Missouri, Kansas, and Washington; Rick Gates, an associate of former Trump campaign manager Paul Manafort, testified in federal court yesterday that he and Mr. Manafort participated in a criminal tax and bank fraud scheme; and Americans seem to detest the word “welfare.” The Mendocino Complex Fire that has turned 283,000 acres to the northwest of Sacramento into a charred hellscape now covers more area than any fire in California history (and it is not because of water policy), the Category 5 Hurricane Hector may have a significant impact on the state of Hawaii, the Asian long-horned tick recently arrived in the United States and is spreading rapidly along the Eastern Seaboard, the Earth may be entering a “hothouse” state, and more people are realizing that highly processed foods are not suited for human consumption. In local news, Mayor Bill de Blasio signed into law a bill that will require Airbnb to disclose the names and addresses of hosts, the New York City Council will vote on a proposal to rezone Inwood, there is activity at the Admiral’s Row site at the Brooklyn Navy Yard, and the L train will not run between Manhattan and Brooklyn for 15 random weekends between now and the 15-month shutdown of interborough service that begins in April.

Bears can evidently play the vuvuzela, an alien mineral was found in Siberia, American chemists are beginning to create biodegradable substitutes for plastic, scientists have transplanted lab-grown lungs into pigs, geneticists have detailed how domestication changes the genome of foxes, female starlings on Prozac are less attractive to male starlings, virtual reality may help schizophrenics, a new study links too much sleep with premature death, “natural” toothpaste doesn’t fight cavities, and we're evidently in the midst of a worm apocalypse. Finally, Bryce Carlson, a teacher from Cincinnati, rowed from Canada to the Isles of Scilly in England in just over 38 days to set a new record for crossing the Atlantic Ocean from west to east.